The presence of the cecal Appendix in a femoral hernia sac is known as De Garengeot by Rene Jacques Croissant De Garengeot a Parisian surgeon of the 18th century.

A 63 year old female patient presented to her family physician with a condition starting 3 weeks prior to her admission, after she slipped and fell to the ground causing no serious lesions but the emergence of a mass in the right inguinal region, painful and evident with Valsalva’s maneuver. A nonsteroidal antinflamatory drug was prescribed for two weeks with worsen of the symptoms described, increased pain, fever, hyporexia and inability to walk. She presented to the emergency room with a palpable nonreductable mass in the rightfemoral region with erytema and hyperthermia. The hemogram showed: leukocytes; 15,600 uL, segmented neutrophils: 83%, lymphocytes: 25%.

The ultrasonography reported a 2cm by 3cm femoral mass with heterogenic content compatible with a femoral abscess.

The CT scan showed continuity of the cecal appendix extending towards the femoral region and the presence of a well circumscribed abscess in the distal portion of the appendix. Laparoscopic exploration of the abdomen proceeded. The appendix was strangulated within a right femoral hernia, necrosis, perforation and abscess formation of the distal portion of the appendix was found. Reduction of the contents of the femoral hernia along with appendectomy was performed. Laparoscopic curettage and placement of a 19 fr Jakson-Pratt drainage in the interior of the femoral canal was done. The fibrotic tissue filled the narrow femoral defect and no hernia was found on subsequent ultrasound examinations (more than 3 years after the surgery).

Femoral hernias are 4% of all hernias, they are more frequent in women, and the risk increases with age. Femoral hernia has the highest rate of imprisonment ranging from 5 to 20%, due to the narrowness and rigidity of the femoral canal. The location of a cecal Appendix in a femoral hernia has an incidence of 0.5% – 5%.(¹) The way in which its presence in the hernia is discovered is mostly during elective surgery rather than emergency surgery.

Many factors have been mentioned to increase the risk of this pathology like abnormal anatomical position of the cecal Appendix an intestinal rotation, changes in the setting of the colon or a long cecal portion directed towards the pelvis. Appendicitis occurs by strangulation within a narrow and rigid femoral defect. In addition, complications such as rupture or abscess formation have been described. (2) The preoperative diagnosis is difficult to make, most of the time the preoperative diagnosis is that of a strangulated femoral hernia until the procedure reveals the real diagnosis. The best study of image to differentiate Garengeot’s hernia and Amyand’s hernia is the CAT scan (3). 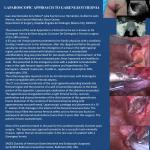