Objective Laparoendoscopic single-site (LESS) surgery is a newly emerging advanced minimally invasive procedure, whereas LESS liver resection has been rarely reported. This study aims to further determine the safety and feasibility of LESS liver resection in a prospective single-arm study.

Methods Between December 2009 and August 2012, 28 eligible patients underwent LESSS liver resection. LESS procedures were performed by using a transumbilical TriPort, SILS port or three 5-mm trocars with a 5-mm linear or flexible laparoscopy. Conventional or articulating laparoscopic instruments were used to mobilize and transect the lesions.

Results LESS liver resection was successfully completed in 26 (92.9%) patients but switched to traditional multi-port laparoscopy in 2 (7.1%) patients. The procedures consisted of left lateral segment resection (n = 12) and partial resection (n = 16), in addition to concomitant cholecystectomy (n = 3). The mean operative time was 110 min (35-180), and the median volume of blood loss was 150 ml (20-800). Massive hemorrhage and biliary leak was noted in a same patient. The mean time to resuming oral intake was in 2 d and the mean length of hospitalization was 5.2 d (2-8). Pathology examinations identified 20 benign and 8 malignant liver tumors.

Conclusions In our preliminary study, LESS liver resection is safe and feasible for appropriately indicated patients, with potential benefits in less invasiveness, fast recovery, reduced mental stress, and cosmetic scar. However, this procedure requires advanced laparoscopic technique and instruments, and intraoperative bleeding and bile leak should be controlled with caution. 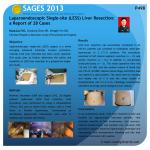