LAGB Revision Surgery: Is There a Role?

Introduction: Many patients who have been successful with their gastric bands do not want them removed or converted if they develop a slip that will not reduce with noninvasive management. Gastric banding in the US peaked in popularity as a surgical option for morbid obesity in 2008 and there are a large number of patients with different types of gastric bands that are either lost to follow up or because of insurance problems have been unable to afford band fills and follow up. Some of those patients sought gastric bands because they did not want a stapled procedure. When they develop an anterior slip that will not resolve with fluid removal (band vacation) and they want to salvage their band and are not interested in a conversion, do you attempt a band revision?

Methods: A retrospective review of revision gastric band surgery performed by Central Carolina Surgery, PA at Cone Health Wesley Long from 2005 to the present was performed.

Results: Excluding conversion of band to bypass or sleeve, removal of bands, or port revisions, a total of 37 operations were performed on 30 patients. The 5 men and 25 women had an average initial BMI of 46.5 and were average age of 43.9 years at the time their band was placed. Their average age at the time of revision was 47 and their BMI after revision surgery was 36. All revisions were seen for anterior slips that failed to respond to “band vacation”, unable to adjust without GER, or presented with acute obstruction. Two of the bands were originally placed in Mexico and two were placed at other U.S. sites. All revisions involved band models from Inamed/Allergan. There were 25 revisions that consisted of reduction of the slip and replication anteriorly. There were 2 revisions that involved completely relocating the posterior tract as well as replicating anteriorly. Three revisions involved converting 10 cm Lapbands to AP systems. On average, the percentage excess weight lost after revision was 37.5% at an average followup interval of 23 months. There were no mortalities.

Conclusion: Revision gastric band surgery may be offered to patients averse to stapled bariatric operations with success rates that trail sleeve gastrectomy and gastric bypass. Many of these patients may not qualify for a conversion and may be better off with a revision than with no band at all. 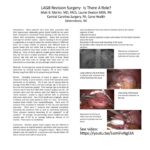