Seprafilm® adhesion barrier is proven to reduce adhesion formation after open abdominal and pelvic operations. We have shown previously that Seprafilm® slurry is safe to use in patients undergoing laparoscopic colectomy. The aim of this study is to evaluate the efficacy of Seprafilm® slurry with regard to adhesive small bowel obstruction (SBO) in patients who underwent laparoscopic colectomy.

Results: The two groups were similar with regard to race, sex, and BMI. Patients in the Seprafilm® slurry group were statistically significantly younger and had a higher ASA score. Three patients in group 1 (no Seprafilm®) developed SBO. None resolved with conservative measure and all three needed an operation to alleviate their obstruction. Three patients developed SBO in group 2 (Seprafilm® slurry); 2 patients resolved with conservative treatment and one needed surgical intervention. The relative risk of developing a SBO or requiring a re-operation, using 95% confidence intervals, showed no significant difference between the two groups. For the Seprafilm® slurry group, the relative risk for developing a SBO was (RR=0.587, CI=0.121-2.840) and of re-operation was (RR=1.031, CI=0.986-1.078). For the nonslurry group, the relative risk of developing SBO was (RR=1.016. CL=0.9671-0.067); and of reoperation was (RR=0.196, CI=0.021-1.850).

Conclusion: This is the first study in the literature that evaluates the efficacy of Seprafilm® slurry. As the RR for the slurry group was almost 59% there was a clinical benefit of reduced risk for SBO although the result was not significant. Because of our small sample size, based upon the available data, the clinical significance was unable to achieve statistic significance in the development of adhesive SBO whether or not patients received Seprafilm® slurry. There was also no statistical difference in whether or not patients treated with slurry were more likely to recover with conservative management. 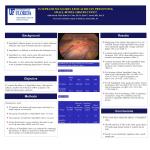