INTRODUCTION: Patients undergoing bariatric surgery have been believed to be at a high risk for thrombo-embolic complications in the peri-operative period. There remains a wide variation in practice for Deep Vein Thrombosis (DVT) prophylaxis in the bariatric surgery patients. These range from aggressive measures such as a routine inferior vena cava (IVC) filter placement in patients with a higher risk of thrombo-embolism, to simply early ambulation with compression stockings without any pharmacologic prophylaxis. We hypothesized that by following a protocol of immediate pre-operative heparin 5000 mg subcutaneous (sc) administration followed by eight hourly Heparin 5000 mg sc administration along with sequential compression stockings and early ambulation starting the evening of surgery, and combining it with a venous surveillance ultrasound on the first post-operative day we could minimize thrombo-embolic complications in all our bariatric patients.

METHODS AND PROCEDURES: We carried out a retrospective analytical study of all patients who were managed per the protocol after the protocol was first adopted; from October 2012 to June 2013 obtaining a minimum three month post-operative follow up. Demographic data, patient risk factors for DVT, venous duplex study results and clinical follow up records were analyzed and data was collected using a Microsoft excel spreadsheet. Data are reported as mean ±standard deviation (SD).

RESULTS: Fifty-seven patients (46 females and 11 males) were managed per our protocol during the eight-month period of our study. Laparoscopic roux-en-y gastric bypass surgery was performed in 29 patients and Laparoscopic sleeve gastrectomy in 28 patients. The mean age was 44.6 years (SD=9.9). The mean Basal Metabolic Index (BMI) was 47.3 (SD=8.0), with 12 patients (21%) with BMI > 55.

Apart from patients with a high BMI, three patients were at a higher risk of thrombo-embolic complications based on their previous history of DVT (one of whom also had Factor 5 Leiden mutation, and one had previous pulmonary embolism also). Two of them were on Coumadin before surgery and had Coumadin resumed the day after surgery.

CONCLUSION: Our study suggests that the incidence of occult DVT is likely low in Bariatric surgery patients and using a standardized protocol combining pre and post-operative heparin prophylaxis with sequential compression stockings and early ambulation the incidence of post-operative thrombo-embolic complications can be minimized, and routine placement of IVC filters in higher risk patients maybe unnecessary. Serial venous duplex scanning could be selectively utilized in high risk patients. Further prospective high powered studies in this regard are required to support our findings. 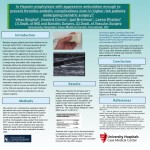