Conclusion– These data show that use of intravenous acetaminophen in the peri-operative period does not reduce acute pain or narcotic use in the bariatric patient population. Given these findings, IV acetaminophen is not a cost effective measure for pain control in the immediate postoperative period. 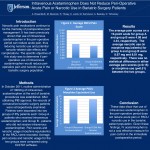