Materials and methods: Porcine models were utilized, with initial and repeat injections of indocyanine green (ICG) (5ml at 5mg/ml at 785nm) or fluorescein (1.5mL of 10% solution at 488nm). The esophagus, stomach, small intestine, bile duct, liver, colon, and peritoneum were accessed through the Da Vinci system and imaged macroscopically using Firefly fluorescence imaging. Subsequently, standard pCLE probes were placed in contact with the respective tissues and microscopic video sequences were recorded (Figure 1). A licensed pathologist was present for the duration of the study and evaluated the quality of microscopic images in real-time at specified time points after injection of ICG. Prototype probe holders (Figure 1a) were designed specifically for the procedure in order to increase maneuverability, and were tested in this setting.

Results: High-quality images were obtained using intravenous ICG and fluorescein in all organs imaged (Figure 1b). With ICG, appropriate fluorescence signal levels could be visualized based on the dosages used. Dynamics of ICG appeared radically different than that of fluorescein, with more rapid extravasation from most tissues examined. Repeat injection enabled further visualization of microarchitectural and cellular details. Image quality was similar after repeated injections. Prolonged retention of ICG in the liver was observed (> 2 hours), enabling stable, and high-quality images of hepatic parenchyma throughout the procedure.

Conclusion: Combined use of optical biopsy, fluorescence imaging, and robotic surgery while using ICG as a contrast agent, was safe, feasible, technically easy, and generated high quality images. This technology holds promise for potential surgical applications such as assessment of margin status in liver and bowel surgery and intraoperative assessment of tumor histology. 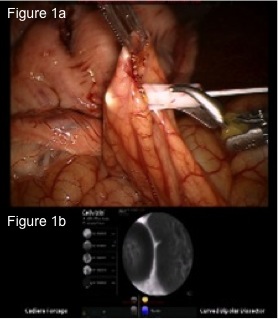