OBJECTIVES: Activation of toll-like receptor 4 (TLR-4) by damage associated molecular patterns (DAMPs) has been implicated in the systemic activation of the immune system in hemorrhagic shock.  This immune response may be deleterious in some patients.  We hypothesized that these effects could be attenuated with the administration of resatorvid (TAK-242), a small molecule inhibitor of TLR-4. We purposed to test this hypothesis in a rat-model of hemorrhagic shock.

METHODS: Anesthetized male Sprague-Dawley rats were subjected to controlled hemorrhage of 40-50 % blood volume.  Resultant hypotension and shock were allowed to persist for a period of 70 minutes before reinfusion of the removed blood in addition to crystalloid.  Animals in the experimental arm were also administered a single IV-dose of TAK.  Blood samples were then collected at defined time intervals and serum cytokines and chemokines analyzed.  Analyzed molecules included IL-1b, IL-2, IL-6, IL-10, IFN-g, KC, MIP1-a, MIP2, MIP3-a, and MCP-1.

RESULTS: Administration of TAK significantly reduced the surges in some serum cytokines and chemokines resulting from hemorrhagic shock as compared to animals who were treated with only transfusion and crystalloid infusion.  Reduction was seen in the majority of measured cytokines, with significant reductions in IFN-g, IL-10, KC, MIP1-a, MIP2, and MCP1 (see figures titled respectively below).

CONCLUSIONS: Administration of TAK effectively modulates the immune response to hemorrhagic shock by attenuating the resultant systemic proinflammatory milieu.  Further studies to evaluate its effectiveness in ameliorating the physiologic consequences of shock would be appropriate.

Please note that the y-axis in all figures below represent the serum concentration of the indicated molecule in pg/mL.  Time points (x-axis) are as follows: 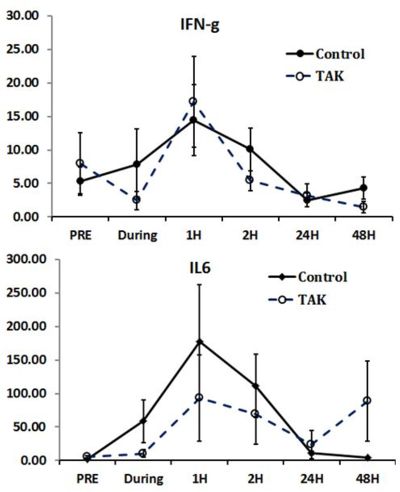 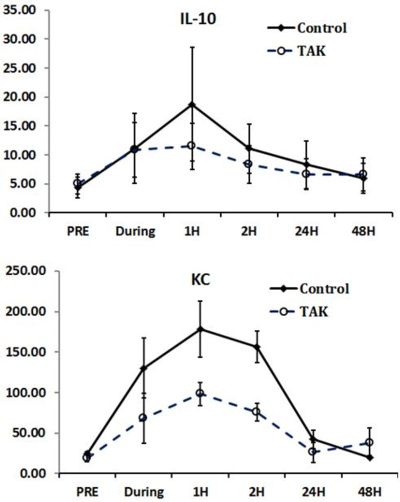 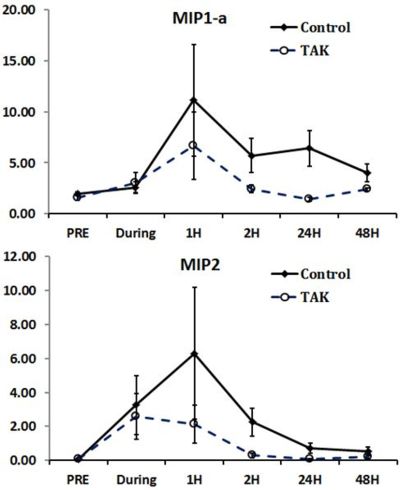 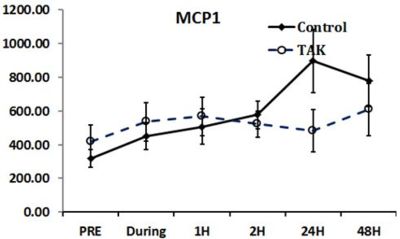