Inconsistencies in the Reporting of Weight Loss in Bariatric Surgery: A Systematic Review

Introduction: The objective of this study was to systematically review the bariatric surgery literature to understand how weight loss is reported. The incidence of obesity has increased globally. According to the World Health Organization more than 600 million were obese in 2014. In the last decade, bariatric surgery has been increasingly utilized as an effective treatment option for severely obese patients. Currently, bariatric surgeries are among the most commonly performed operations. The primary outcome of such procedures is weight loss which has been shown to vary according to the type of surgery. However, there are different methods used to report weight loss which makes it difficult to directly compare outcomes between studies. A previous review by Dixon et al. in 2004 revealed a wide heterogeneity in weight loss reporting. However, there have been no recent reviews on the reporting of weight loss in bariatric surgery.

Methods: A search of the MEDLINE electronic database was performed for studies published in 2016 using search terms gastric bypass/sleeve gastrectomy, weight, human, and English. Articles were selected by two independent reviewers based on the following inclusion criteria: (1) adult participant ≥ 18 years; (2) Roux-en-Y gastric bypass or sleeve gastrectomy; (3) randomized controlled trial; (4) with the reporting of weight loss. The search resulted in 109 titles or abstracts after removing duplicates.

Results: Seventy-three randomized controlled studies were included. The total number of patients were 5,948 and the majority were female (71.6%). The most commonly performed procedure was Roux-en-Y gastric bypass (82.2%). The mean follow-up period was 23.2 months with 83.6% of the studies having at least one-year follow-up.  Preoperatively, most of the studies reported mean body mass index (BMI) (87.7%) and mean weight (65.8%), however, there was wide heterogeneity in the reporting of postoperative weight loss. The following measures were most frequently used; mean BMI (71.2%), mean percentage excess weight loss (41.1%), mean percentage of weight loss (35.6%), and mean weight (32.9%) (Figure 1). 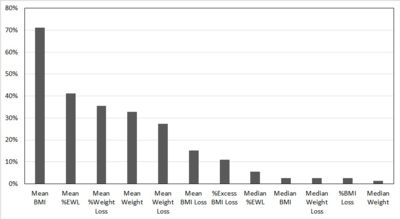