During a double-blind randomized controlled trial comparing patient outcomes for single port versus 4-port cholecystectomy (NCT0148943), heart rate monitoring and salivary cortisol levels were used to measure surgeon stress and workload. Continuous heart rate data was collected using a portable heart rate monitor attached to the surgeon’s chest with wireless data capture. Heart rate was sampled at three points in the operation: prior to the start (baseline), after clipping the cystic duct, and immediately after the procedure. Average heart rate, maximum heart rate, and mean change between the three distinct points within each procedure were analyzed. Salivary cortisol levels were sampled from the surgeon before the random assignment of the surgical procedure, during the surgery after the cystic duct was clipped, and after the procedure ended. The salivary specimens were placed on dry ice, stored at -80oF and assayed using ELISA (Salimetrics Inc.). To account for cortisol diurnal rhythm changes, only-first cases of the day were included in the cortisol analysis. After each procedure, the surgeon completed the SURG-TLX questionnaire, which is a validated workload assessment adapted from the National Aeronautics and Space Administration-Task load index (NASA-TLX). Student t-tests, Wilcoxon rank sum test, and Kruskal-wallis non-parametric ANOVAS on the dependent variables by the technique (single-port vs 4-port) were performed in intention to treat analysis with α=0.05.

Objective stress measures of heart rate and salivary cortisol, and subjective physical workload on SURG-TLX were higher during SILC, indicating that SILC may be more stressful and physically demanding to the surgeon than the 4-port. Surgeon stress and workload may impact patients’ outcomes, thus ergonomic improvement on SILC is necessary. 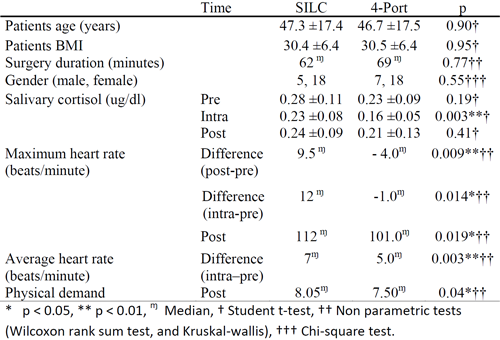