Introduction: Robotic technique is the advanced and developing form of minimally invasive surgery. Limited data exist about course and current condition of robot use in general surgery. In this study, we aimed to assess adoption of evolving robots in the field of general surgery.

Conclusions: While Xi platform significantly increased caseload in general surgery by facilitating performance of colorectal surgery, its preference in other general surgical fields is not superior to Si. Considering its visual superiority and financial benefits, sustaining Si seems feasible from institutional perspective if colorectal surgery is not one of the high-volume departments in a hospital. 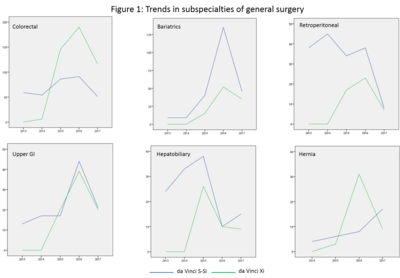