The role of the robotic da Vinci ® system in right hemicolectomy is not fully understood.  Aim of the study is the evaluate the operative and postoperative results of hybrid laparoscopic-robotic right hemicolectomy with intracorporeal anastomosis for adenocarcinoma of the ascending colon as compared with the standard laparoscopic approach with extracorporeal anastomosis in a case control study

Thirty consecutive right hemicolectomies for cancer (January 2008-june 2011) with laparoscopic medial to lateral dissection, vascular ligation, bowel transection and robotic intracoporeal anastomosis with specimen extraction through a Pfannestiel incision (robotic group-RG) were compared with 30 consecutive laparoscopic hemicolectomies (january 2008-june 2011) with extracorporeal anastomosis and specimen extraction through a periumbilical  minilaparotomy (laparoscopic group-LG). Patients were started on oral diet after the first passage of gas and discharged when fully functional. Operative and postoperative results were entered in prospectively maintained data base and analysed using Chi square and t-test when appropriate.

This hybrid technique of laparoscopic mobilisation and dissection of the right colon with robotic intracorporeal anastomosis allows a faster recover when compared to standard laparoscopy. Anastomotic complications are lower with this technique even though the difference did not reach statistical significance, probably because of the small sample size. These results may be explained by the fact that robotic intracorporeal anastomosis is performed comfortably without pulling the bowel through a small minilaparotomy , without the need of an unnecessary mobilisation and manipulation of the transverse colon and under direct visualisation of the mesentery. In addition the Pfannestiel incision seems to have a lower risk of ventral hernia when compared to the periumbilical minilaparotomy that is needed to accommodate the transverse colon and the small bowel in order  to perform the extracorporeal anastomosis 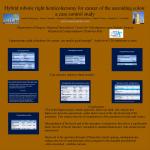