INTRODUCTION – Hiatal hernia is rare after transhiatal esophagectomy occurring in less than 2% of patients. Even more rare is a small bowel obstruction to occurring at the hiatus. We present the case of a mechanical small bowel obstruction occurring at the hiatus in a patient four years after transhiatal esophagectomy. The patient was successfully managed conservatively with resolution of his SBO.

CASE PRESENTATION – 63 year old male with past medical history of esophageal carcinoma who underwent a transhiatal esophagectomy in 2011 presented to the office with dysphagia. Barium swallow was performed which was consistent with aspiration secondary to dysphagia. Given recurrent episodes of aspiration, the decision was made to laparoscopically place an elective jejunostomy tube (J-tube). Trophic tube feeds were started on post-operative day (POD) #1 and gradually advanced to goal. The patient began to have increasing abdominal pain and thus a contrasted CT-scan was obtained showing left diaphragmatic hernia with transition point in the small bowel at the hiatus without evidence of cancer recurrence (Figure 1). The decision was made to manage this patient conservatively given his multiple medical comorbidities and high risk for surgery. Tube feeds were resumed once the patient had return of bowel function and was discharged to a skilled nursing facility on POD #22, tolerating tube feeds and feeling well.

DISCUSSION – Diaphragmatic hernia occurring at the hiatus after esophagectomy occurs in 0.4-15% of patients. The hernia rate is higher for minimally invasive esophagectomy than for transhiatal esophagectomy. It is hypothesized that adhesions from open surgery are responsible for the decreased hernia rate after transhiatal esophagectomy. Diagnosing a diaphragmatic hernia in such patients can be enigmatic especially if the patient is symptomatic. Although rare, it is important to keep this clinical entity in mind as it can be associated with serious complications such as gastrointestinal bleeding, small bowel obstruction and possible perforation. CT scan is likely the best modality to detect the hernia and possible complications associated with it. Mortality rates associated with complicated hernia range from 20-80% if discovered late and only 10% if discovered early. Presentation varies but may include respiratory distress, nausea/emesis, chest pain, gastrointestinal bleeding or vague abdominal pain. In this case we present the successful conservative management of a patient with small bowel obstruction related to a diaphragmatic hernia suggesting the feasibility of this treatment option.

Figure 1. Transition point at the hiatus indicated by arrow. 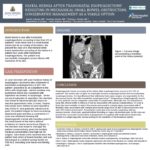