Gastroesophageal Reflux is Common After Both Sleeve and Band; GER is Precancerous Lesion; a Warning to Surgeons and Patients: the Band and Sleeve May Lead to GER and Esophageal Cancer

Therefore an intervention that significantly increases the rate and severity of GER can be predicted to increase the frequency of esophageal cancer.

When presented with this question: “GERD Increases Risk of Cancer of Esophagus. Longer GERD = More Risk. GERD can cause Barrett’s = even higher risk,” from the American Cancer Society.

With the reference for this quote provided (2): 88.9% of surgeons Agreed but remarkably 11% disagreed? The 11% that disagreed were more likely supporters of the Band and the Sleeve, (Good or Adequate surgery 42.9% and 85.8% respectively)

When presented with question “Numerous Studies Now Show that the Band and the Sleeve can increase acid reflux and be associated with Barretts.”

When asked for quantitative data on the incidence of GER after Band or Sleeve, we asked what is the “Postop GE Reflux rate (%)” in Band patients. The surgeons reported that 26.5%, over one quarter of Band patients, suffer GER post op and importantly this is an increase from less than 10% reported with GER preop. In Sleeve patients surgeons reported that the Pre op GE Reflux rate (%) was 8% and post op increased to 27.7%

Conclusions: Although some band and sleeve surgeons may not agree GER is a recognized precursor to esophageal cancer. In addition this survey data confirms other publications that these restrictive and obstructive procedures lead increase of GER in at least 25% of patients. In one study chronic daily reflux symptoms was associated with a 44 fold increase in risk of esophageal cancer. It appears that Sleeve and Band surgeons should warn their patients of the long term risk of GER and esophageal cancer. 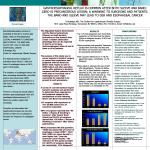