Esophagectomy is a complex operation associated with serious immediate complications and long term chronic complications. Gastric ulcers are a common chronic complication after esophagectomy with gastric conduit reconstruction. These are rarely complicated by significant bleeding or perforation. We report a case of delayed diagnosis of a fistula forming between a gastric conduit and right bronchial tree 13 years after esophagectomy. This was successfully treated using multiple therapeutic approaches including endoscopic localization and resection through a right thoractomy. To the best of our knowledge, our patient is the only survivor from a chronic gastric conduit bronchial fistula.

Repeat endoscopy revealed two large chronic ulcers that had increased in size based on comparison of pictures from endoscopies 3 to 6 years after his esophagectomy despite maximal medical management. The patient presented to numerous specialists at tertiary care centers in Canada and the United States. Ultimately, in a clinic the patient was observed to cough immediately after the ingestion of water, but not solids leading to a provisional diagnosis of a gastrobronchial fistula. A barium swallow failed to show a fistula (Figure 1). However at endoscopy, instillation of saline directed at an ulcer immediately induced a cough, but this was not reproduced when the saline was directed away from the ulcer. The fistula was ultimately demonstrated by placing a wire through the ulcer and visualizing it bronchoscopically in the right superior segmental bronchus (Figures 2-4).

In an effort to pursue a minimally invasive approach two attempts were made to close the fistula with over-the- scope clips (OTSC). Unfortunately, the patient’s symptoms persisted. A wire was placed through the fistula and delivered through the patient’s mouth and endotracheal tube. A right thoracotomy allowed access to the conduit, which was opened and the fistula localized using the wire. The fistula was resected and the bronchus closed. At twelve month follow up the patient did not have a recurrent cough or hemoptysis while tolerating a full diet. 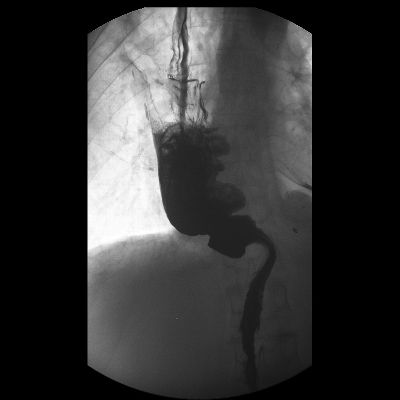 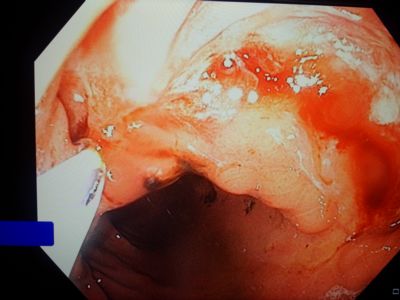 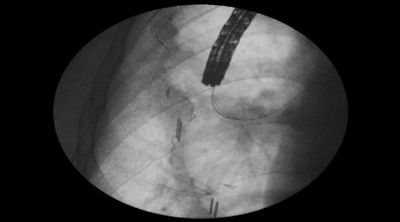 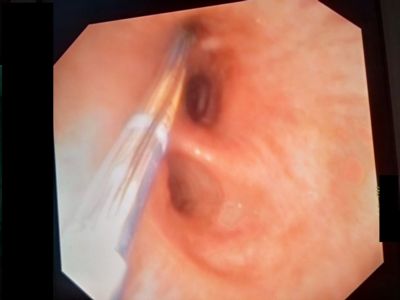