Ganglioneuroma of the Adrenal Gland and Retroperitoneum. A Report of Unusual Case and Review of the Literature

Ganglioneuroma of the Adrenal Gland and Retroperitoneum. A Report of an Unusual Case and Review of the Literature

Introduction: Ganglioneuromas, benign tumors of sympathetic nervous system are rare to arise in adrenal gland. They are usually asymptomatic and hormonally silent. Majority of cases are detected incidentally during work up for other unrelated conditions. Currently histopathologic examination is the only tool to diagnose ganglioneuroma and to differentiate it from other neural crest tumors. Up to the current era of laparoscopic adrenal mass excision, this unusual entity has not been adequately reported in american surgical literature.

Conclusions: Ganglioneuroma occurs rarely in adrenal gland and preoperative diagnosis is difficult since symptoms are usually nonspecific. Due to widespread utilization of abdominal ultrasonography, CT scan and MRI, detection of such tumor has increased, therefore it should be included in differential diagnosis of adrenal or retroperitoneal mass. Histopathologic examination is currently the mainstay of diagnosis. 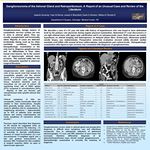