Backgrounds: Lateral pelvic lymph node (LPLN) metastasis has been considered as distant metastasis and often treated by systemic chemotherapy. However, complete radical resection of LPLN metastasis can achieve cure in some patients. As safety and efficacy of radical LPLN resection have not been well elucidated, this study evaluated the feasibility of laparoscopic radical LPLN resection comparing with the conventional open approach and oncological outcome between the patients with and without re-recurrence after LPLN resection.

Patients and methods: We retrospectively reviewed the clinical records of 17 patients who underwent radical resection for metastasis of LPLN after curative rectal surgery between July 2012 and August 2016 in Osaka National Hospital.There were 4 open surgeries and 13 laparoscopic surgeries.Operative factors (time, blood loss, post-operative complications, CRP elevation, and post-operative hospital stay) were compared between the open and laparoscopic surgeries. Sixteen patients had pre-operative chemoradiation and/or radiation therapy. Oncological outcomes were assessed in terms of response of preoperativeadjuvant therapy. Responders were defined as the pathological tumor regression greater than 67% of all tumor areas.

Conclusions: Laparoscopic surgery for LPLN metastasis was feasible and less invasive than open surgery. Laparoscopic radical resection of LPLN might be justified in some cases for cure intent. Patients with incomplete pathologic response to neoadjuvant therapy should be followed carefully and adjuvant therapy must be considered. 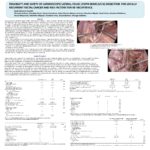