Methods
After IRB approval we performed a retrospective analysis of a prospective database of bariatric surgery patients at the Palo Alto VA Hospital. Data for age, gender, weight, laboratory values, and smoking history were obtained. Correlation between changes in fasting insulin levels and Framingham risk scores was determined using a Pearson correlation coefficient.

Results
Of 202 total patients who had bariatric surgery between 2005 and 2011, 48 were available for a minimum of one year follow up. Gastric bypass, sleeve gastrectomy, and adjustable gastric banding comprised 2.1%, 93.8%, and 4.2% of the operations, respectively. There were 39 males (81.3%) with a mean age of 53 years and a mean pre-operative body mass index of 46.4 kg/m2. Of these, 47.9% were taking diabetic medications at the time of surgery. The average mean excess body weight lost was 60%. All patients had a decrease in fasting insulin 1- year after surgery, with a mean decrease of 31.2 mU/L. The average preoperative fasting insulin level was 44.2 mU/L, and the average one year post operative fasting insulin level was 13.0 mU/L. There was a corresponding decrease in the Framingham risk score by -6.8%. The average preoperative Framingham risk score was 19.1%, and the average one year post operative Framingham risk score was 12.3%. The Pearson correlation coefficient was 0.3. 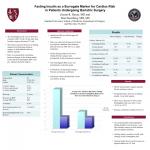