Background:
The available data reports the efficacy of the 3D vision system and its superiority to 2D. However the physiological effect of 3D on surgeons remains unaddressed.
Aims:
We aimed to objectively investigate the effect of 3D on ocular and hand muscles fatigue in comparison to 2D and its impact on surgical performance in novices.

Results:
The VST showed a higher mean score in the 3D group of 3.92 in comparison to the 2D group with mean of 3.15, (P-value = 0.23). It is apparent from VA test that the 3D group had a better VA on both eyes compared to the 2D group after performing the suturing task (right eye; P-value=0.29, left eye P-value=0.47). There was no statistical difference in handgrip strength between both display groups (right hand; P-value=0.55, left hand P-value=0.70). The 3D group demonstrated statistically evident superior performance in terms of less slippage errors (P-value=0.003) and gap errors (P-value=0.015), number of repetitions and accuracy were similar in both groups (P-value=0.81 and P-value=0.20 respectively).

Conclusion:
3D offers superior visual feedback that positively reflects on the VA and accuracy which in turn favourably impact training and patient safety. 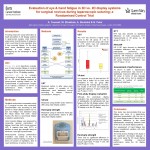