Background: There are competing goals in the surgical treatment of esophageal cancer. One is to minimize the physiologic impact of the operation and the other is to maximize the resection of regional lymph nodes. The former can be accomplished with a transhiatal esophagectomy, and the latter is maximized with an open transthoracic/transabdominal en bloc resection. The relationship of the minimally invasive thoracoscopic/laparoscopic esophagectomy to these competing goals is unclear. The aim of this study was to compare the yield of resected nodes, complications, and local-regional recurrence rates after minimally invasive (MIE), transhiatal (THE) and en bloc esophagectomy (EBE)
Methods: Retrospective review of the records of all patients from 2002 to 2008 with submucosal or deeper adenocarcinoma of the distal esophagus or gastroesophageal junction that had MIE, THE or EBE.
Results: There were 30 patients with MIE, 49 patients with THE and 108 patients with EBE. Patients in the EBE group were significantly younger (p<0.0001), while the prevalence of a major co-morbid condition was significantly greater in the MIE group (p=0.0024). There was no difference in the frequency of minor complications, but major complications were significantly more common after MIE (p=0.0066). MIE resulted in significantly more resected nodes than THE (40 vs. 33, p=0.0256). However, the EBE removed significantly more lymph nodes (median 49 nodes) compared to the other groups (p<0.0001). After MIE and EBE 50% of the resected nodes were from the mediastinum compared to only 37% in patients that had a THE. Local-regional recurrence was 7% and was similar in the 3 groups (p=0.6132).
Conclusion: After MIE significantly more lymph nodes were removed compared to THE, but less than with EBE. The rate of major complications was higher after MIE, which may be explained by the higher frequency of co-morbid conditions. Further follow-up will be necessary to determine whether the increased node yields with MIE lead to a long-term survival advantage in these patients compared to those that had THE. 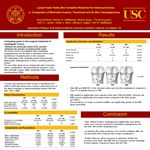