Introduction: Distractions are recognized as a significant factor affecting performance in hospitals. Although operating rooms are generally full of distractions, little is known about the effect of distractions on robot-assisted surgical performance. Direct communication with the bedside assistant, nursing staff, and anesthesia is limited by the separation of the surgeon console from the sterile surgical field. However, the role of feedback in counteracting distraction on learning has not been well studied. The objective of this study was to investigate the role of feedback on skill learning in robot-assisted surgery with the presence of distractions.

Methods and Procedures: Eighteen subjects were randomly assigned into three groups: outcome feedback (OFD), process feedback (PFD) and control group without any feedback. Participants performed a suturing task using intracorporeal knot with the Da Vinci Surgical System (dVSS). PFD was provided while watching subjects’ previously recorded performance whereas OFD was provided based on the result of the performance. Subjects were exposed to three distractions intermittently during training: passive, active and interactive. Passive distraction entailed listening to background noise with a constant heart rate. Active distraction included listening to background noise with random heart rate changes from 60 to 120 bpm and subjects had to acknowledge this change. Interactive distraction involved answering math questions during the task. Kinematics [time to task completion (TTC) and total distance travelled (TD) of the dVSS instrument tips] were measured before and after training and again 2 weeks after training. Error rates during the training trials were also recorded. A one-way ANOVA was applied to test the differences in kinematics between pre- and post-test as well as pre- and retention test.

Conclusions: Compared with process feedback, outcome feedback seems to be more prominent in minimizing the effect of distraction on learning in robotic surgery. This feedback could potentially be useful to enhance training regimen for surgical trainees. Further investigation is required to study the effect of feedback on robotic surgical learning in different skill levels of surgical trainees (e.g. medical students vs. residents) to confirm our findings. 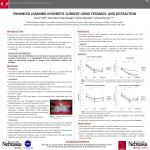