Background: Dysphagia is a common symptom for advanced esophageal cancer. Both chemoradiation and/or stent placement may not fully alleviate dysphagia and are not without its morbidities. Argon plasma coagulation (APC) is characterized by noncontact coagulation and ablates the tumor site circumferentially. APC can be performed endoscopically as an outpatient and has been well-described in treating Barrett’s esophagus. Its utility in alleviating malignant dysphagia has not been well-described.

Results: Four patients with advanced esophageal cancer and symptomatic dysphagia treated with APC were identified. The mean age was 65 years old (range: 58-84) and were followed for a mean 2.5 years (range: 2 to 4 years). All patients had an American Society of Anesthesia (ASA) Classification 3. The mean procedure time of APC was 38.3 ± 31.8 minutes. Dysphagia improved immediately post-procedure. There was no post-procedural morbidity or mortality. Two patients had complete absence of gross lesions on surveillance endoscopy. One patient (Patient 3), who had a prior heart transplant, had both a distal GEJ tumor and a gastric tumor. Ablation of his distal GEJ tumor allowed for subsequent formal resection.

TABLE 1. Staging and Number of Procedures.

Conclusions: APC therapy is a safe and useful treatment for patients with malignant dysphagia who are not surgical candidates and cannot tolerate stents. Repeat endoscopic APC is feasible with minimal morbidity. 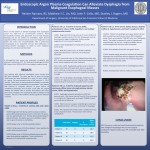