Introduction: Heller myotomy is the standard surgical therapy for patients with achalasia. Although it is associated with a fundoplication in the majority of cases, postoperative reflux remains to be a challenge. Recently, POEM procedure has gained acceptance as an endoscopic alternative to surgical myotomy with encouraging results in different centers. However, the impossibility of adding a fundoplication is questioned as the main pitfall to control reflux. Electrical stimulation of LES with Endostim technology has emerged as a new alternative for the treatment of GERD. Briefly, the technology involves an implantable pacemaker with two leads implanted at the LES level that provide controlled release of electrical stimuli to improve the LES function and can be tailored to the patient’s reflux pattern. Early series reported successful control of symptoms and normalization of pH up to one year follow-up. The objective of this study was to evaluate the potential benefits of associating LES stimulation after esophageal myotomy to prevent post-procedure reflux.

Methods: Two pigs were subjected to POEM to obtain a 10cm myotomy, involving the LES completely and extending 2-3 cm onto the gastric cardia. After myotomy was completed, two electrical leads were implanted at the LES level and electrical stimulation was applied with the Endostim system with a regimen of 215usec (5ma amplitude), at 20Hz for 25 min. LES pressures were recorded with manometry at pre-, post-myotomy and after LES stimulation.

Conclusions: Initial findings show that electrical stimulation of the LES after POEM procedure effectively increases the LES pressure supporting recent clinical reports for GERD patients who had been treated by the Endostim device. Association of this novel technology with surgical or endoscopic myotomy may benefit those patients suffering from post-operative reflux. 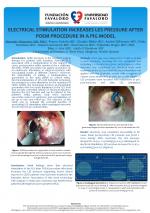