Introduction
Localisation of the neoplasm during Iwor-Lewis Two Stage oesophagectomy (TSO) is an essential step for curative resection. Various methods including per-oral endoscopy and injection of dyes such as methylene blue have been used to assist the upper GI surgeon to locate non-palpable early oesophageal cancer (EOC), during TSO.

We evaluated IRGOS where the scope is introduced through gastric end for locating the lesion at thoracotomy during TSO. We describe our experience with this technique in aiding the task of intraoperative localisation of the oesophageal cancer.

Methods
The patients needing this procedure were identified by the difficulty in locating the canerous lesion through palpation of the oesophagus during the thoracotomy stage of TSO. We introduced the scope retrograde through the gastric end and placed an oesophageal vicryl stay stitch proximal to the lesion.
All the patients undergoing TSO at our tertiary upper gastrointestinal cancer institute over a 4 year period (n=112) were prospectively studied to identify the advantage of intraoperative retrograde oesophagoscopy.

Results
Five patients had IRGOS during this period. In all, we were able to locate the lesion, assisting in satisfactory proximal clearance. This was confirmed later by final histopathology results.

Conclusion
Intraoperative retrograde gastro-oesophagoscopy (IRGOS) is a useful and handy technique that deserves to be included in the armamentarium of upper gastrointestinal cancer surgeons. 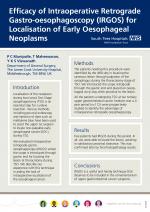