Effect of Bariatric Surgery on Systemic and Adipose Tissue Inflammation

The University of Tennessee Graduate School of Medicine

Introduction
Obese patients are predisposed to developing insulin resistance and associated diseases such as diabetes, dyslipidemia, atherosclerosis, hypertension and cardiovascular disease. The purpose of this study is to help understand the effect of bariatric surgery on the expression and release of inflammatory mediators which play a key role in insulin resistance and obesity.

Hypothesis
We hypothesized that there is a significant increase in serum adiponectin after bariatric surgery thus leading to an increase in insulin sensitivity.

Methods
In this study, we investigated the effects of bariatric surgery on serum levels of adiponectin in diabetic and non-diabetic obese patients. Subjects were divided into two groups, gastric bypass and gastric banding. Samples of serum and adipose tissue were collected at the time of surgery and 2 weeks post operatively. The collected serum samples were analyzed to examine post procedure adiponectin levels. A power analysis was performed using G*Power v3.1 (HHU, 2011) with a beta of .20 and an alpha of 05. Assuming that a mean difference of 22.5pg/ml adiponectin exists between patient and control groups at posttest, 23 subjects will be needed in each arm. We are presenting preliminary data for an ongoing study and patient enrollment will continue until we reach the adequate power outlined by our original analysis.

Results
Currently we have examined 4 patients who underwent laparoscopic gastric band (LB) placement and 9 patients who have undergone Roux En Y gastric bypass (RYGB). For our preliminary results, the descriptive statistics indicated a large change in mean serum adiponectin from zero to two weeks in the RYGB group compared to a somewhat smaller change in the LB group. A mixed analysis of variance was used to gather preliminary statistical evidence as well as gauge the statistical power of the study at this time. Results of this analysis revealed that the two groups did not statistically differ from zero to two weeks (p=.136), nor was there as statistically significant interaction between bariatric surgery and change in mean adiponectin (p=.103). While not statistically significant, it should be noted that post-hoc power analysis revealed this ongoing study to be underpowered (1-β=.313), which was expected at this point in the process.

Conclusions
These preliminary results demonstrate an increase in serum adiponectin after bariatric surgery. We plan to continue our analysis on a prospectively enrolled cohort. We also plan to expand this analysis to include adipose tissue levels of adiponectin and both serum and adipose tissue levels of MCP-1. This research will help lend understanding to the inflammatory mechanisms that influence insulin resistance and obesity. 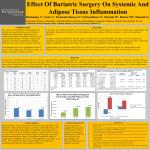