BACKGROUND: Per Oral Endoscopic Myotomy (POEM) has proven to be a viable therapeutic modality for the treatment of idiopathic achalasia. Cost data has not been reported which evaluates the cost of POEM. The purpose of this study was to retrospectively collect and compare cost data for laparoscopic myotomy (LM), POEM, and pneumatic dilation (PD).

RESULTS: One-hundred-and-thirteen patients underwent treatment for achalasia during the study period. Total charges, including professional fees and total hospital charges, were collected for LM (n=95), POEM (n=18), and PD (n=13). Laparoscopic Heller myotomies were charged on average $44,839 while Per Oral Endoscopic Myotomies comparably cost $41,730. Representative dilation cost was found to be $9,190 per episode of endoscopic outpatient dilation. For serial dilations, cost savings was realized for LMs at 4.87 dilations and realized for POEMs at 4.54 dilations.

CONCLUSIONS: Retrospective financial analysis reveals that the operative cost of POEM is similar to that of LM. In the absence of serious complications, pneumatic dilation remains less costly than surgical myotomy when fewer than four treatments are required. As experience with POEM increases, its cost may decrease, particularly if it can be safely performed as an outpatient procedure. 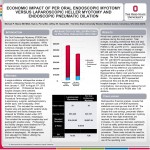