Economic Impact of Anastomotic Leaks in Colectomy Procedures in the USA: 2005-2009 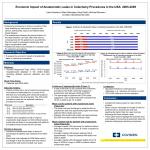