BACKGROUND: The aim of this study was to compare outcomes after hand-assisted (HAL), total laparoscopic (TL), and open restorative proctocolectomy with ileal pouch-anal anastomosis (IPAA).

METHODS: After IRB approval, all patients undergoing HAL, TL or open IPAA at our institution between 2000 and 2013 were identified from a prospectively maintained database. Data including demographics, preoperative and operative details, and postoperative complications were compared among the three groups.

RESULTS: The groups included 36 HAL, 100 TL and 107 open IPAA patients. Patients in the open and HAL groups were older than those in the TL group (p= 0.03, p= 0.0001, respectively). The three groups were similar in terms of gender, BMI, ASA score, preoperative use of immunosuppressants, diagnosis, anastomosis type, pouch configuration, and use of ileostomy. Operative time was longer in HAL and TL when compared to open IPAA (mean, 270 vs 273 vs 226 minutes, respectively). Estimated blood loss was greater in open versus HAL or TL IPAA (mean, 284 vs 208 vs 186 ml, p=0.001). The mean incision length was 7.7 cm in both successful HAL and TL groups, and 12 cm in converted HAL and 20.6 cm in converted TL groups. The length of hospital stay was shorter in the HAL versus TL or open groups (mean, 6.7 vs.8.5 vs 8.6 days, respectively). No differences in the type or incidence of morbidity were found among the groups.

CONCLUSIONS: Although there are differences in terms of operative time, estimated blood loss, and length of hospital stay, HAL, TL and open IPAA are associated with similar morbidity. 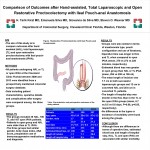