Material and Methods: 120 patients, who were admitted and treated with the diagnoses of gall bladder and common bile duct stones between January 2008 and September 2010 were included in the study. The patients were prospectively randomized in two groups, which were LCBDE with LC in a single intervention and LC after ERCP. 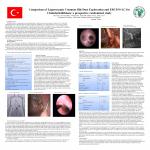