Objective of the study: Laparoscopic mesh repair has become an increasingly common method for repairing incisional hernias. The current method for performing this repair includes tacking a mesh to the inner surface of the abdominal wall. The iMESH Tacker™ (IMT) is a device which simplifies the procedure by enabling an articulation of the device’s tip. The study compares the strength of mesh fixation between the IMT and another commercial tack device (ACT). Both tacks are absorbable.

Description of the methods: strips of mesh were surgically installed on the inner surface of the abdominal wall in three commercial pigs. Half of them were fixated by IMT and half were fixated by ACT. Euthanasia was done immediately to the first pig, following 14 days to the second and after 27 days to the third pig. The abdominal was harvested and the mesh strips were pulled while fixation force was measured. Samples from both groups were sent for histo-pathological examination. Statistical analysis was done using the two tailed t-test. 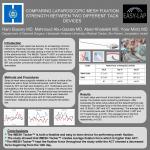