Materials and Methods: 102 patients matched in terms of Age ,sex, BMI and co morbidities were randomized into 2 groups and 51 patients each underwent MGB and RYGB. Patients were followed up for a period of 2 yrs and the 2 groups were compared in terms of operative time, complications, reoperation rate, weight loss, BMI reduction, glycosylated hemoglobin(diabetes control) and dyslipidemia. Out of the 51 patients in the MGB group 2 patients had early post operative obstruction and required re operation. 1 patient from this group was lost to follow up.4 patients from the RYGB group had early post operative obstruction and required reoperation.1 patient was lost to follow up

Results: Post operatively a minor complication rate of 5% was noted with the minigastric bypass group compared to 4.7 % with rou en y group.Rate of major complications including anastomotic leak was found to be equivalent in both the groups.* 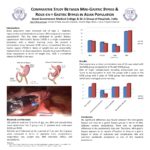