INTRODUCTION: We propose a surgical strategy we have developed for performing laparoscopic complete mesocolic excision via a combination of medial and cranial approaches with three dimensional visualization around GCT and its tributaries to avoid organ injury in patients with transverse colon cancer. This technical strategy achieves a three dimensional visualization of the surgical anatomy around the GCT, SMV and SMA. This procedure is technically simple and allows safe lymph nodes dissection around the GCT, SMV and SMA. We show our surgical procedure using video record.

PROCEDURES: First, the medial approach started by exposing the superior mesenteric vein (SMV) and then separating between the transverse mesocolon and pancreatic head, preserving the duodenum. The meddle colic arteries (MCAs) were identified arising from superior mesenteric artery (SMA) and divided at their roots, accompanied by lymph node dissection. Next, the GCT, MCV, anterior superior pancreaticoduodenal vein (ASPDV), and accessory right colic vein (ARCV) were carefully and sufficiently exposed from the medial side. The embryological tissue plane between the pancreatic head and the transverse mesocolon was then separated. And then, a cranial approach was performed by dissecting the greater omentum, after which the fusion fascia between the omentum and the transverse mesocolon was separated. The transverse mesocolon was then dissected below the lower edge of the pancreas, exposing the SMV. The ARCV was carefully dissected with the lymph node, thus accomplishing radical lymph node dissection along the SMV and SMA with 3D visualization around the GCT. We divided the MCV from the medial side and completed radical lymph node dissection.

SURGICAL OUTCOMES: Complete mesocolic excision completeness was graded as the mesocolic and intramesocolic plane in 21 and 3 patients, respectively. Eleven, two, eight, and three patients had T1, T2, T3, and T4a tumors, respectively; none had lymph node metastases. Mean of 18.3 lymph nodes were retrieved. Mean of 5.4 lymph nodes were retrieved around the origin of the MCV. The mean of large bowel length was 21.9 cm, operative time 274 min, intraoperative blood loss 41 mL and length of hospital stay 15 days. There were no intraoperative and two postoperative complications. 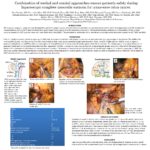