Purpose: To show that educational interventions for endoscopists can result in improved colonoscopy quality outcomes.

Methods: This retrospective cohort study was performed on fourteen fully trained endoscopists practicing in St. John's, Newfoundland who have undergone CSI training. CSI training was completed between October 2014 and December 2015. Fifty procedures immediately prior to and after undergoing training were included for each endoscopist. Subjects were identified through records from the health authority. Data were extracted from the electronic medical record (EMR), recorded on a standardized data sheet and entered into SPSS version 20.0 for analysis. Student’s T-test was used to compare groups for continuous data; Chi-squared tests were used for categorical data.

Results: Thus far, partial data for analysis have been collected for 1329 procedures. Seven endoscopists were Gastroenterologists and seven were General Surgeons. The most common indication for colonoscopy was family history of colorectal cancer in 188 (14.1%) patients. Patient groups pre and post CSI training were comparable in terms of: mean age (59.6yrs v. 60.4yrs), sex (55.8% female v. 51.9% female), and indication. Procedure was completed based on intent in 1232 (92.7%) cases. There was no difference in completion or cecal intubation rates between groups. Fentanyl and versed were the only sedation agents used. Intravenous sedation was used in 1183 (89%) cases. There was no difference in the rate of sedation usage between groups. There was a statistically significant decrease in average dose of fentanyl (80.5mcg v. 70.9mcg, p<0.001) and average dose of versed (2.6mg v. 2.3mg, p<0.001) used during each procedure after CSI training.

Conclusions: Participation in the CAG CSI program was associated with decreased sedation usage during colonoscopy. Further study is necessary to assess improvements in other quality outcomes. 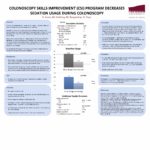