Introduction: The purpose of this study was to examine the biologic environment of the esophageal hiatus through analysis of the collagen content within the gastrohepatic ligament (GHL), gastrophrenic ligament (GPL), and phrenoesophageal ligament (PEL) in patients with Type III paraesophageal hernias (PEH).

Methods: A control group (N=10) with achalasia and patients (N=10) with Type III PEH were included in the analysis. Specimens of the GHL, PEL and GPL were collected intraoperatively and preserved in formalin. Slides were prepared with Sirius Red/Fast Green (SR/FG) stain, and 10 photos were taken of each specimen at 40x magnification. Axiovision 4.7 (Zeiss) photo analysis software was employed to quantify the area (µm2) stained for collagen type I (Red) versus collagen type III (Green). Statistical significance (p<0.05) was determined using an unpaired, two-tailed t-test.

Results: Photo analysis revealed the PEH group contained significantly less type III collagen compared to the control group for the GHL (p=0.001) and PEL (P=0.002). Type I collagen was more prevalent within the GPL of the PEH group vs. control (p=0.008). Collagen ratios (I/III) of the study groups were calculated, and demonstrated a greater ratio in the PEH group for all three ligaments (GPL, p=0.027; PEL, p=0.002; GHL, p=0.001). 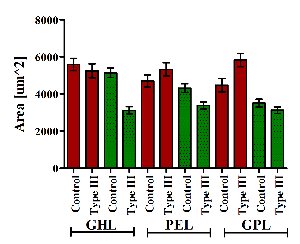 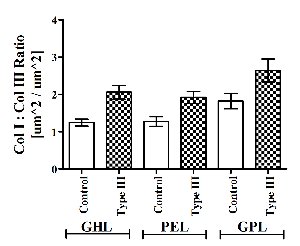 Conclusion: Evaluation of the esophageal hiatus revealed that patients with Type III PEH have a different biologic environment in regards to collagen resulting in a higher collagen ratio (I/III) compared to control patients. Collagen Deficiency in the GE junction supporting ligaments does not appear to be an etiology of PEH formation.