The second case was an 82-year old female with admission for severe biliary pancreatitis. She underwent uneventful cholecystectomy following resolution of her pancreatitis. Recurrent admissions were subsequently managed by the medicine service, due to comorbidities. Upon re-referral to therapeutic endoscopy, she underwent ERCP. Initial cholangiogram images showed multiple large filling defects within the common bile duct. Due to the length of procedure, bile duct clearance was deferred. She underwent a small sphincterotomy and stent placement. She had uneventful recovery and subsequent discharge. She was readmitted with melena two weeks later, and EGD and ERCP confirmed hemobilia with no evidence of bile duct stones. CT Angiography revealed a right hepatic artery aneurysm decompressing into the biliary tree, which was successfully coiled by interventional radiology. Final diagnosis was recurrent pancreatitis secondary to blood clot within the biliary tree.

The majority of filling defects on biliary imaging are stones or sludge, but as these cases illustrate other causes are possible. Additional causes described in the literature include foreign bodies like clips, and parasites. These alternative etiologies may require different management than the standard cholecystectomy and bile duct clearance. 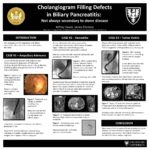