Characteristics of women eligible for bariatric surgery: a study of 2013-2014 NHANES data

Methods: The population of reproductive age BE women was identified from the 2013-2014 National Health and Nutrition Examination Survey. Demographic, psychological and reproductive variables in BE and non-BE adult women who participated in the survey, were analyzed using chi-square test.

Conclusion: Significant differences between BE and non-BE women of reproductive age were prevalent based on sociodemographic factors, namely, income and insurance coverage and marginally significant differences were observed in race/ethnicity and education. Significantly higher prevalence of major depression and trends for infertility observed in BE women emphasize a need for better understanding of the demographic, psychological and reproductive factors in reproductive age BE women. Based on such information tailored interventions can help increase their access to bariatric surgery and prevent future morbidity. 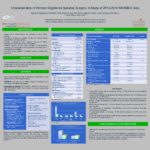