INTRODUCTION: Gastric outlet obstruction (GOO) usually presents with emesis with or without abdominal pain. Imaging will show a dilated stomach and may also show a paucity of gas in the distal gut. Causes included peptic ulcers, cancers, or other pathologies. Treatment is often aimed at the underlying etiology. Here we report a case of an unusual cause of GOO.

CASE DESCRIPTION: M.B., a 48 year old woman, presented with LUQ pain associated with anorexia, but denied any nausea or emesis. Her surgical history was a laparoscopic uterine fibroid excision over ten years ago. She had a sense of fullness in the epigastrium associated with some tenderness. A CT of the abdomen showed a dilated stomach with an abrupt narrowing at the distal gastric body, suspicious for gastric outlet obstruction (Figure 1). She was admitted and a nasogastric tube was placed. An EGD showed what appeared to be a large hiatal hernia, but there was no gastric mass or ulcer (Figure 2). Furthermore, the pylorus was widely patent (Figure 3). An upper GI contrast study showed similar results to the CT – a dilated stomach with tapering distally. Interestingly, there was no hiatal hernia (Figure 4). Endoscopic ultrasound did not reveal any extrinsic pathology, although the endoscopist was concerned for an internal hernia (Figure 5). A diagnostic laparoscopy showed an adhesion from the falciform ligament to the base of the transverse mesocolon (Figure 6). This created an internal hernia that included the transverse colon and the distal stomach. The adhesion was lysed with ultrasonic shears. The external compression of the stomach was clearly visible (Figure 7). Postoperatively, her diet was advanced as tolerated. She was discharged on postoperative day two.

DISCUSSION: The cause of this patient’s GOO is certainly a rare cause of such pathology. One thought is whether the history of fibroid resection contributed to the adhesion. The author’s opinion is no because of the considerable distance from the pelvis to the falciform. The adhesion was presumed to be congenital. The case emphasizes the need to maintain a broad differential, especially when there is discordance between studies. The hiatal hernia seen on EGD was not present on prior imaging. In retrospect, this was most likely the level of the adhesive band. 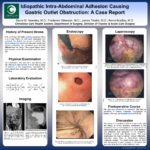