Methods: A private insurance claims database was used to identity 17,434 patients who underwent bariatric surgery from 2002-2006. Of these patients, 972 were found to have a preoperative IVC filter placed. Seven hundred eight-nine patients from this cohort were case matched, based on age, sex, type of surgery, and pre-existing VTE, to non-IVC filter patients from the same database (n=1578). A multivariate logistic regression analysis was performed on the data to identify significant differences between the cohorts.

Conclusions: This study serves as the largest retrospective analysis of bariatric surgery patients who underwent preoperative IVC filter placement in the literature to date. While complication rates were higher in those who underwent a preoperative IVC filter, it appears that mortality rates for both groups are equivalent. The presence of an IVC filter appears to be protective for high risk patients, as the risk of pulmonary embolism in this high-risk group is not significantly different from the general population. 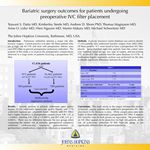