The aim of this study is to analyze the pressure applied by the surgeons' fingers and palm of the hand using a novel handheld robotic laparoscopic instrument with an ergonomic handle, and comparing it with the use of a conventional laparoscopic needle holder during laparoscopic urethrovesical anastomosis.

Two experienced surgeons (>100 laparoscopic procedures) took part in this study. They performed an urethrovesical anastomosis on a porcine model using a novel handheld robotic laparoscopic instrument and a conventional axial-handled laparoscopic needle holder (Karl Storz GmbH & Co. KG, Tuttlingen, Germany). The initial procedure, using the robotic or conventional laparoscopic instrument, was randomly selected for each surgeon. The robotic instrument (DEXTM, Dextérité Surgical, France) is a motor-driven device that provides a flexible tip and unlimited rotation with seven degrees of freedom, ergonomic handle, and haptic feedback. During each procedure, the Finger Tactile Pressure Sensing System (FingerTPS; Pressure Profile Systems, Los Angeles, CA, USA) was used to measure the pressure exerted on the laparoscopic instruments by the surgeon's fingers (thumb, index and middle) and palm of the hand. The FingerTPS system comprises of a series of sensors connected by Bluetooth to the computer where the capture and analysis software is running (Figure 1). The set of sensors was calibrated for each subject before each procedure. At the end of each procedure the bladder was filled with Methylene blue to test the patency and leakage of the anastomosis. 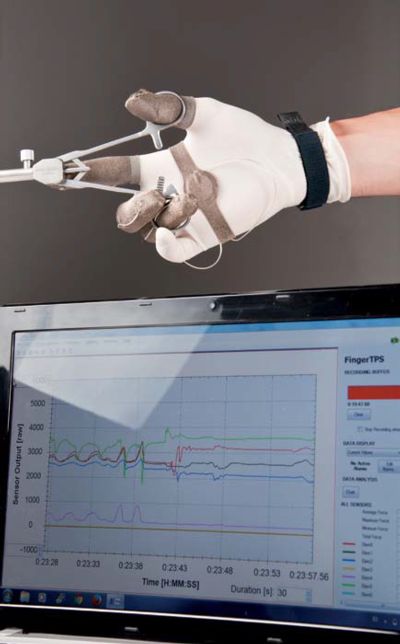 All urethrovesical anastomoses were completed using a total of eight sutures. Results show that the pressure exerted by the thumb is notably higher during the use of the robotic instrument. This is due to the interaction with the controls installed on the handle of the instrument. The pressures registered by the index and middle finger as well as the palm of the hand are very similar when using both types of laparoscopic instruments. None of the anastomoses performed with the conventional laparoscopic needle holder leaked. However, all anastomoses performed with the robotic instrument leaked during the patency test.

Obtained results show that the FingerTPS system allows us to analyze the pressure applied by the surgeon's fingers and palm while using different laparoscopic instruments during surgical procedures. The robotic needle holder exerts the same pressure by the fingers and palm of the hand than the conventional laparoscopic needle holder, except for the thumb. We believe that the quality of the anastomosis can be improved with a longer training period with the presented novel instrument. Further studies should be done to analyze the pressure applied by other parts of the hands on these laparoscopic instruments such as the intermediate phalanges of the thumb, index and middle fingers.