The aim of this study was to investigate the effects of laparoendoscopic single-site surgery (LESS) and conventional laparoscopic (LAP) approaches on the appearance of localized muscle fatigue (LMF) on the trapezius (upper, middle and lower) and midcervical paraspinals muscles.

Eight experienced surgeons (>100 laparoscopic procedures; >20 LESS procedures) participated in the study. All surgeons were right-handed. Subjects performed a dissection of the serosa layer on an ex vivo porcine stomach during 10 min. This task was carried out inside a box trainer using both LESS and LAP approaches (Figure 1). For both approaches, a 5-mm, 30-degree rigid laparoscope (KARL STORZ GmbH&Co.KG, Tuttlingen, Germany) was used as vision system, which was controlled by the same camera assistant. Subjects were randomly assigned to two groups, performing the task by conventional laparoscopic approach (LAP) or by LESS approach, with a 3-min break between procedures. During laparoscopic task performance, subjects used a laparoscopic scissors (EndoShears®, Covidien, Mansfield, USA) on the right hand and a laparoscopic dissector (EndoDissect®, Covidien) on the left hand. For LESS dissection, they used an articulating tip scissors (SILS Shears®, Covidien) on the right hand and on the left hand a dissector with the same characteristics (SILS Dissector®, Covidien). Both instruments were inserted though a SILSTM port (Covidien). The Trigno™ Wireless EMG Systems (Delsys Inc., Natick, MA, USA) was used to record the muscle activity during the dissection tasks. Electrodes were attached to skin using adhesive strips according to standard bipolar positions (Figure 2). The skin was previously cleaned with 70% isopropyl alcohol. The electromyograms (EMG) were detected with DE-2.3 sensors, pre-amplified (1000V/V gain, CMRR>80dB, input impedance >100M/?), and band-pass filtered (20-450Hz, 20dB/oct). EMG signals were digitized at 1KHz by a MyomonitorIVTM 16-channel system (16bits, range ±5V) and wireless transmitted to a PC for analysis. Butterworth 4th-order high-pass filter at 30Hz was used to remove electrocardiogram artefacts. The temporal shift of the median frequency (fMEDIAN) of the EMG power spectrum computed every 10-secs was used as indicator of LMF. The RMS of the EMG amplitude (RMSEMG), normalized on its maximum value of each muscle and subject, respectively, was used as an indicator of muscle intervention. Lineal regression analysis was used to quantify fMEDIAN steepness and repeated-measures ANOVA to compare RMSEMG values between procedures (α<.05). 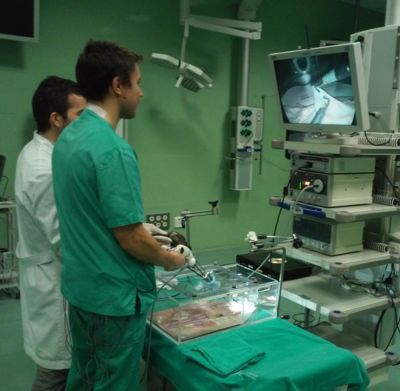 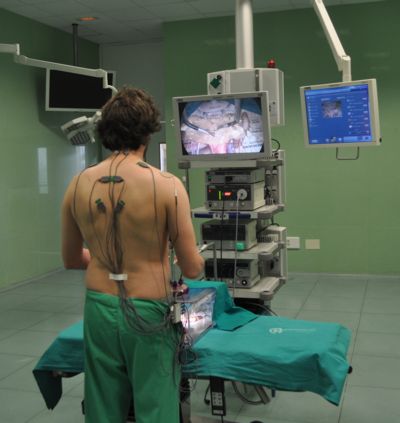 Figure 2. Details of the sensor position for the left and right trapezius muscles (upper, middle, lower) and midcervical paraspinal muscles.

Significant EMG spectral shifts towards lower frequencies were seen in all surgeons in at least one muscle in both procedures, except one surgeon during LESS. Significant differences were found for the right upper trapezius and midcervical paraspinal muscles (F[1,7]> 6.65 , p< .05).

Surgeons manifest LMF in both LESS and conventional laparoscopic approaches. However, the right upper trapezius and midcervical paraspinal muscular demand is higher during LESS approach.