An Unusual Case of Pleural Chordoma

Chordoma is a rare slow-growing neoplasm arising from notochordal remnants. In the United States, the annual incidence of chordoma is 0.08 per 100,000, more common in males than females. The most common locations of Chordoma are cranial (32%), spine (32.8%) and sacral (29.2%). Here, we report an unusual case of pleural chordoma in 45- year-old man.

The tumor was composed of large epithelioid or polygonal cells with copious clear cytoplasm and mild atypical vesicular nuclei. The immunostain failed to provide any clear evidence of a specific line of differentiation. Patient had a negative metastatic workup including PET/CT, CT of abdomen and pelvis, and brain and spine MRI. He had excellent pulmonary function test and V/Q scan showed 36.5% of perfusion to the left lung. Based on patient’s young age, extensive pleural disease and diagnosis of clear cell carcinoma, a left radical extrapleural pneumonectomy, resection of diaphragm and pericardium with reconstruction with Gore-Tex mesh was performed. Intraoperatively, it was noted that there was extrapleural extension of the tumor overlying the T6~T8 vertebral bodies next to the aorta. This area was resected en-bloc with the rest of the specimen. Final surgical pathology revealed metastatic chordoma. Patient completed adjuvant radiation therapy to the left hemithorax with a boost to the paravertebral spine region, for a total dose of 6660cGy.

Chordoma is more common in males than females and rare among patients younger than 40 years old. Median survival was reported to be 6.29 years. Chordoma has an indolent course and often appears radiographically as destructive bone lesions. The distinct feature of chordoma is the local invasion of the intervertebral disc space, which is seldom seen in osteosarcoma and chondrosarcoma. However, in the patient we reported, there was no intervertebral lesion detected on CT and MRI scan. Microscopically, chordoma manifests as one of three types: classical, chondroid or dedifferentiated. The mainstay of treatment of chordoma is en-bloc excision with wide margins and postoperative external-beam radiation therapy. Positive tumor margin is associated with two fold higher local recurrence rate and radical resection significantly decreased recurrence rate compared to the subtotal excision of chordoma. It is believed that radiation therapy in combination with debulking surgery provides an added survival advantage. Unlike radiation therapy, conventional chemotherapy has been proven ineffective in the treatment of chordoma. In summary, chordoma is a very rare tumor arising from notochord remnants. It has a high local recurrent rate despite aggressive debulking surgery combined with radiation therapy. 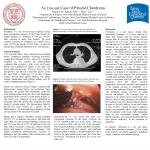