Introduction: NOTES represents a potentially less invasive alternative to conventional laparoscopy. By traversing the gastric or colonic wall to gain access to the peritoneal cavity, the traditional percutaneous route is avoided. However, breach of the gut wall raises the specter of intra-peritoneal infection. Various anti-microbial techniques have been employed—sterile saline rinse, intravenous and topical antibiotics, and povidone-iodine—although there is a paucity of data regarding their general effectiveness. The aim of this study was to assess the effectiveness of existing sterilization techniques for NOTES by quantifying and speciating colony-forming units (CFU’s) before and after treatment.

Methods: Stomachs and distal colons were harvested en bloc from ten fasted pigs following euthanasia. Five of these animals received 1g of Cefazolin intravenously prior to sacrifice. After the organs were filleted open in sterile fashion, they were further sub-divided into 1.5” x 1.5” full-thickness square samples. Each tissue sample was then assigned to one of five treatment arms: (1) sterile 0.9% saline lavage, (2) povidone-iodine lavage, (3) lavage with a Cefazolin/Metronidazole suspension, (4) 4% Chlorhexidine lavage, or (5) no treatment. 15 samples were used per arm. Following 5 minutes of contact time with the treatment solution, the mucosal surface of each tissue sample was swabbed with a sterile applicator and inoculated for 1 hour, followed by serial dilutions. 100 mL aliquots of each dilution were plated onto Sheep’s blood agar plates and incubated in aerobic and anaerobic conditions. CFU’s were quantified after seven days, and representative samples were sent to a commercial veterinary laboratory for speciation.

Results: Median bacterial density was estimated to be 8.0 x 105 CFU’s/mL for stomach and 1.9 x 106 CFU’s/mL for colon. The predominant organisms were Escherichia coli in stomach and both Escherichia coli and Enterococcus sp in colon. Lavage with both saline and antibiotic suspension caused an approximate 1-log reduction in both stomach and colon to the 105 range. Lavage with povidone-iodine and Chlorhexidine resulted in a 4-log reduction to the 102 range.The use of intravenous Cefazolin alone resulted in a 4-log reduction. The combined use of intravenous antibiotics and either povidone-iodine or Chlorhexidine decreased counts to the 101 range. Data was analyzed using the Kruskal-Wallis method and found to be statistically significant (P < 0.001).

Conclusions: Intravenous Cefazolin alone reduced bacterial burden from approximately the 106 range to the 102 range in both gastric and colonic mucosa. Lavage with both saline and an antibiotic suspension was minimally effective, reducing microbial burden approximately 1-log order to the 105 range. Povidone-iodine and chlorhexidine were the most effective topical treatments, both reducing microbial burden approximately 4-log fold to the 102 range. The combination of intravenous Cefazolin and either povidone-iodine or chlorhexidine effectively reduced microbial burden to the 101 range in both gastric and colonic mucosa—the highest degree of sterility achieved in this study. For maximal sterility prior to translumenal breach, the results of this study argue for the combined use of intravenous antibiotics and topical antiseptics. 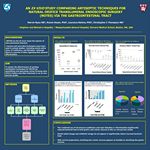