This is the case of a 61yo morbidly obese Caucasian male with a history of vertical banded gastroplasty thirty years ago. He had only minimal weight loss postoperatively and remained obese his entire adult life. He had no issues with eating until 48 hours prior to presentation, at which point he complained of 2 days of non-bilious emesis. He had no other complaints. CT scan demonstrated a dilated proximal gastric pouch without passage of enteral contrast into the remainder of the stomach or beyond.

Surgical evaluation was requested. Aside from mild discomfort and morbid obesity, no physical exam abnormalities were found. Urgent endoscopy was performed revealing a dilated proximal pouch with moderate amount of retained food; a tight ring-like stricture measuring 12mm in diameter was found at the location of the previous gastric band. Aside from mild gastritis in the antrum, there was no intraluminal pathology.

The following day, the patient was taken to the operating room. Endoscopy was performed and the pouch was once again evacuated. The gastric antrum was trans illuminated, and a brisk impulse was noted in the epigastrium. A safe tract method was utilized to pass a 12mm blunt-tipped laparoscopic trocar into the gastric antrum. Through this, an endoscopic linear, articulating stapling device (Ethicon Echelon FLEX™ Endopath®) was passed. A 60mm length, 2mm closed staple height stapler was chosen. The stapler straddled the vertical gastric band. A single fire was utilized to release the gastric stricture. A gastrostomy tube was placed in the site of the trocar. On postoperative day 5, a contrasted upper GI was obtained with demonstrated normal passage of contrast into the gastric antrum and slightly delayed transit passed the pylorus. He was initiated on a diet, first of clear liquids, then of bland solids. He was discharged on postoperative day six completely symptom free.

Endoscopic approaches to VBG band erosions and migrations have been described in several case reports and small series. Additionally, intragastric surgery has been utilized safely in the treatment of mucosal-based pathologies, such as stromal tumors. In this case, the well-accepted standard of roux-en-Y gastric bypass was not an acceptable option for the management of his acute presentation based on medical co-morbidities, continued disordered eating and prior hernia repairs. Our hybrid approach provided a minimally invasive revision surgery, minimizing the peri-operative risk in a medically and surgically high-risk patient. Intragastric laparoscopy with endoscopy is an elegant solution to this difficult problem and should be considered in otherwise difficult operative patients 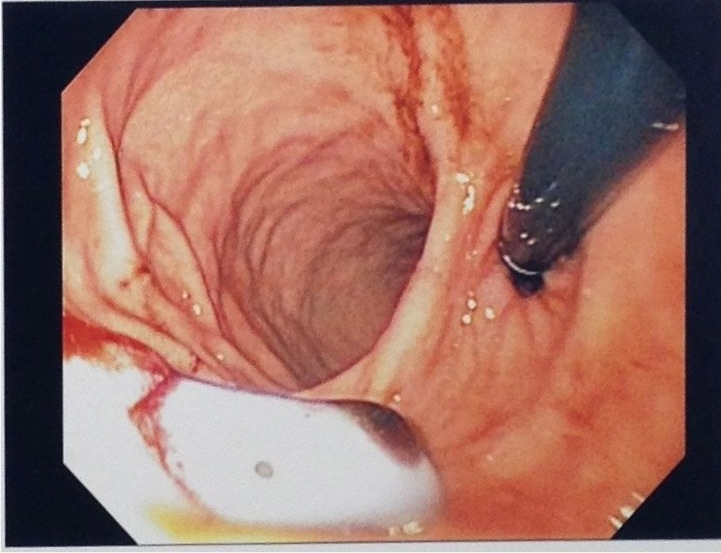 Before, endoscope is passed through the stricture and then retroflexed. The vertical band is fully visualized . The trocar is seen in the lower left corner.

After, the band has been stappled and the stricture has been released.