Method: Between January 2012 and July 2014, 23 morbid obese and 17 morbid obese diabetic patients underwent LSG, with 19 lean diabetic and 15 lean subjects as control. Fasting blood Samples were collected for Glucose, insulin, Proinsulin, C-peptide, HbA1c and Amylin preoperatively and from control group then at 7, 15, 30, 60, 90,180 and 360 days postoperatively. 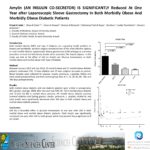