Introduction: Diagnosis of acute appendicitis (AA) in pregnancy is more difficult due to physiologic changes, a higher rate of nausea/vomiting and non-specific abdominal pain in pregnancy. Study goals were to evaluate the diagnostic accuracy of the Alvarado Score (AS) in pregnancy and C-reactive protein (CRP) as an additional indicator for the diagnosis. The final goal was a construction of a decision-making algorithm.

Methods and procedures: Operated patients between 2005 and 2014 were analyzed retrospectively. AS was calculated from the medical records. The cut-off point of 7 was taken as the indication for the operation. The control (not operated) group was collected prospectively from January 2013 to January 2014 in the same department and by same abdominal surgeons. This group consisted of consecutive pregnant patients with RLQ abdominal pain in which the possibility of AA was ruled out by AS score and CRP.

Results: There were 16 operated and 16 not operated patients. Patients’ age and weeks of pregnancy were not statistically different. In total, 15 of 16 (93.8%) operated patients had confirmed AA, remaining patient having appendicolith. Of these 15 confirmed cases only one had AS of only 6, others 7 or higher. All patients in the non-operated group had AS 5 or lower. CRP was statistically significantly higher in the operated group. 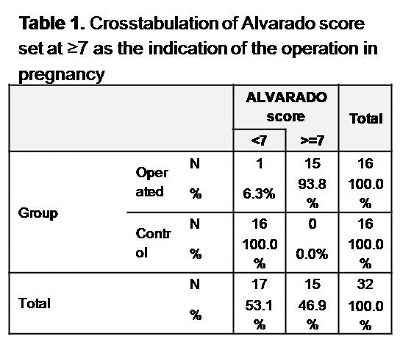 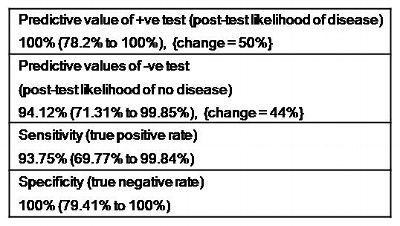 Conclusions: Alvarado score with the addition of CRP is an excellent tool for the prediction of AA during pregnancy. In patients with AS of 5-6 diagnostic modalities are mandatory. Constructed diagnostic algorithm should be tested in prospective multicentric studies to confirm its value. 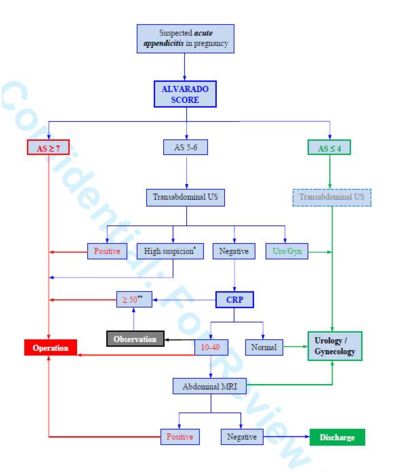