Introduction: We report an unusual case of solitary transverse colon diverticulitis in a young woman, presenting as right-sided abdominal pain.

Methods and Procedures: A 27 year old female presented to our emergency department complaining of right-sided abdominal pain of two days duration. She complained of anorexia, but denied fevers, chills, nausea, diarrhea or constipation. Her physical examination was significant for right-sided abdominal tenderness to palpation with voluntary guarding but without evidence of peritonitis. Laboratory studies revealed a leukocytosis of 12,100/uL, a normal hepatic function panel, and a negative pregnancy test. A computed tomography scan was performed to evaluate for possible appendicitis. Although the appendix was well-visualized and normal there was a thickened blind-ending tubular structure in the right lower quadrant. The radiologic diagnosis was presumed Meckel’s diverticulitis, but we noted that the inflamed mass appeared to be arising from the colon and did not appear to be connected to the umbilicus by any discernible structure. The patient was admitted and placed on intravenous antibiotics and bowel rest. Diagnostic laparoscopy on hospital day number three demonstrated no mass connected to the umbilicus, thereby ruling out a Meckel’s diverticulum. Upon conversion to midline laparotomy we identified a small mass in the proximal transverse colon which arose from either the mesentery or the bowel wall. We performed a segmental resection of this segment with a stapled side-to-side functional end-to-end anastomosis. Frozen section was negative for evidence of malignancy. The patient recovered uneventfully and was discharged home on post-operative day five. The final pathologic evaluation revealed acute inflammation of a solitary and proximal transverse colon diverticulum.

Conclusions: Acute diverticulitis should remain on the differential for right-sided abdominal pain. Diverticulitis occurs most commonly in the left colon with solitary diverticula occurring occasionally in the right colon, and rarely in the transverse colon. Solitary right-sided colonic diverticula are usually congenital, in contrast to the more common acquired left-sided diverticula. Consideration of this possible diagnosis in our patient might have prevented unnecessary operation by allowing treatment with intravenous antibiotics only. However, this entity is so rare that its natural course is poorly understood; consequently, segmental colon resection is an appropriate treatment and may likely be the least morbid approach to prevent future complications in a young patient such as ours. 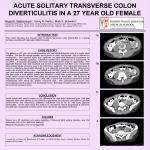