A single surgeon’s experience of single site robotic cholecystectomy : The timeline of progress

Results: The female to male ratio was 2:1. The mean age was 51 years (18-87) and the mean BMI was 28 (18-41). Overall, 69% of the patients underwent elective cholecystectomy and 31% required urgent surgery. The groups were comparable for perioperative data. The overall conversion rate was 4.9% and the complication rate was 4%. The docking time, robotic time, and average operative time were significantly different in the first group as compared to the remaining the five groups (P=0.000). Further analysis of the above variables for groups 2 through 5 did not differ statistically.

Conclusion: Single-site robotic cholecystectomy is safe and feasible in both elective and urgent conditions, and in patients with previous abdominal surgeries. It requires a short learning curve and has the benefits of minimally invasive surgery. 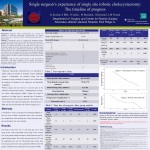