Introduction: This study reports the first USA prospective human trial evaluating the clinical performance of the THUNDERBEAT energy device. The quest for improvements and optimization of energy devices in surgery is on-going. Recently the Society of American Gastrointestinal and Endoscopic Surgeons (SAGES) initiated the Fundamental Use of Surgical Energy (FUSE) program to develop training in energy device safety and optimal use. A combined energy device using ultrasound and bipolar energy has been developed [THUNDERBEAT, (TB), Olympus, Tokyo] to pursue this quest and is approved by the FDA. We previously reported on this technology’s versatility within the porcine model, concluding that this device should decrease time and increase versatility during surgical procedures.

Methods and Procedures: Prospective pilot study with 30 subjects undergoing left or right colon resection for neoplasm in a single institution. All soft tissue dissection and vessel ligation was performed using TB. No other energy device was used within the abdomen. Recorded end-points were: dissection time (from start of colon mobilization to specimen removal), surgical procedure time, times TB was taken out of the abdominal cavity, use of other energy devices, intraoperative complications (bleeding at time of mesenteric dissection, bleeding at time of vessel ligation, visible thermal injury during surgery, injury of other organs), device technical problems, postoperative complications (postop bleeding, delayed thermal injuries, other postoperative complications within 30 days), length of hospital stay and mortality.

Results: To date, 25 subjects have been enrolled in the study and 40 % were males. Median age and range was 66 (21-88) and BMI was 26(20-35). Nine subjects underwent right and 16 left hemicolectomy. The mean surgical procedure time was 155±47 minutes and mean time for dissection using TB device was 80±35 minutes. Major vessel ligation was successful in all subjects. The mean number of TB applications to seal IMA was 3±1.6. TB device was taken out of the abdominal cavity during dissection in only 9/25 cases for tip cleaning reasons. No intraoperative adverse events were noted in this study. There were no postoperative events (bleeding or delayed thermal organ injuries, etc.) related to the use of TB.

Conclusions: The THUNDERBEAT device demonstrated efficient and successful performance at tissue dissection and major mesenteric vessel ligation in all subjects. THUNDERBEAT technology can be employed in complex abdominal surgery and may save time through faster dissection but comparative studies with other energy devices are needed to confirm this. 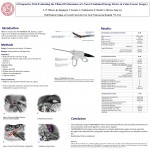