Methods and Procedures: A retrospective review of the prospectively obtained data in the American College of Surgeons National Surgical Quality Improvement Program public use files from 2010 through 2015. Cases were selected using ICD-9/10™ and CPT™ codes. Perioperative risks and 30-day outcomes were compared in unmatched and propensity matched groups using parametric or non-parametric statistical tests as appropriate. Significance was set at p < .05.

The propensity matching resulted in 235 laparoscopic and 437 open cases of similar age, ASA class, preoperative SIRS/sepsis, hypoalbuminemia, and wound class. The matched groups had few patients with preoperative septic shock given it was rare in the laparoscopic group. Mortality did not differ between the matched groups (4.7% Lap. vs. 5.7% Open, p = .720), nor did most complication rates. Operative duration was 20 minutes longer in the laparoscopic group (p < .001). Median length of stay was 1 day longer in the open group (6 [5-9] vs. 5 [4-7], p < .001) which also had higher rates of prolonged ventilation (7.8% vs. 3.4%, p = .029). Return to the operating room and readmission within 30 days did not differ between the two matched groups.

Conclusions: We have shown in a contemporary, large multicenter cohort of patients that emergent laparoscopic repair of perforated gastric ulcer is increasingly being performed, is safe relative to open repair (in patients without preoperative septic shock), and confers a modest benefit in terms of length of stay and respiratory complications. 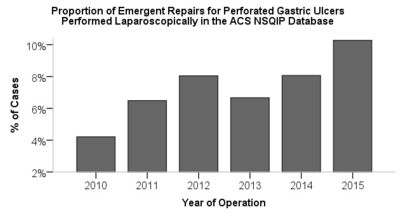