RESULTS: Cholecystectomy was the most frequent surgery performed with 19 cases (38%); hernia surgery 12 cases( 24%); fundoplication 6 cases(12%), appendectomy 4 cases (8%), left colon excison with colo-rectal anastomosis 3  cases(6%), and other  6 cases (12%) wich included ovarian cyst excision, liver biopsy, prostatectomy and pediatric surgery. We compared each 3D procedure with a standard laparoscopy case performed by the same surgeon during the time of the study. 3D vs 2D surgical procedures outcome measures are shown in Table 1. 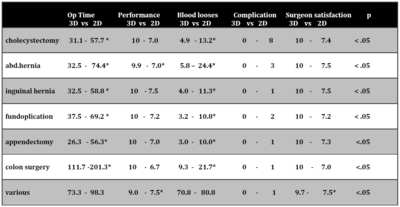